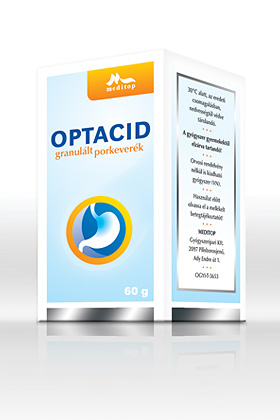 An overworked and stressful lifestyle – the effectiveness of digestive juices is impaired – Optacid's buffering effect re-establishes the pH balance both in cases of gastric acidity and anacidity. The re-established and optimal pH environment ensures the functioning of the digestive enzyme pepsin and also improves digestion.

The active ingredients of Optacid are sodium dihydrogen phosphate dihydrate and sodium bisulphate. Optacid granules can be used to treat the following symptoms: a pathological acidification of the gastric juices, gastric anacidity, acid reflux, stomach complaints caused by irregular eating habits, digestive complaints caused by a lack of acid (diarrhoea), skin symptoms caused by gastric acid secretion problems and peptic ulcers of the stomach and duodenum.

Following the dissolving of Optacid granules in water, the two inorganic salts in the medicine, sodium dihydrogen phosphate dihydrate and sodium bisulphate, create a so-called buffering solution, which is capable of re-establishing gastric acidity to its biologically normal levels both in cases where the pH is too acidic and too alkaline. This is why Optacid can be used to treat the symptoms of both excessive gastric acidity and anacidity.

The pH of approx. 2.7 established by Optacid in the stomach enables the proper functioning of the digestive enzyme pepsin found in the stomach, the optimal pH level of which for protein digestion is approx. 2. When Optacid is used, there is no risk of driving the stomach into too alkaline a state, which would result in a decreased digestive efficacy.

The sodium bicarbonate and citric acid found in Optacid react with each other in a water-based solution, producing a bubbling effect from the production of carbon dioxide gas; this helps the granules dissolve more quickly.

Optacid is a medicine that is also available outside pharmacies.

More information can be found at: www.optacid.hu